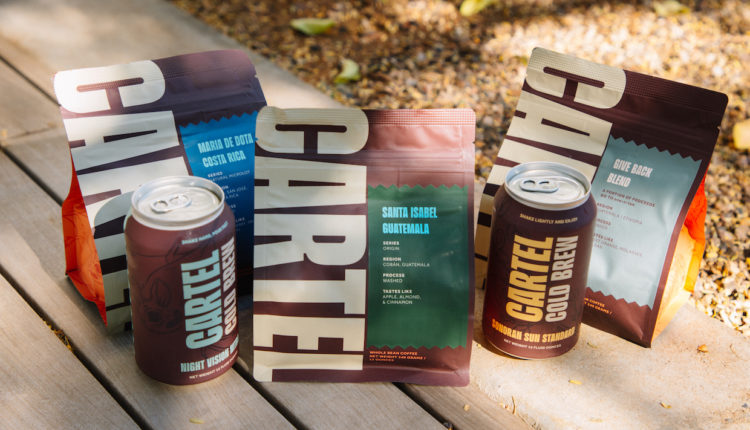 For the new bags and a new website that launched in December, Cartel collaborated with the Phoenix firm Monomyth Studio refreshing the brand more clearly convey regional distinction and the company’s commitment to carefully sourced specialty coffees.

“[We] utilized hand-drawn illustrations by Mike Giles [of Monomyth Studio] to evoke the desert imagery of the cities we operate in,” Cartel Co-Founder Amy Silberschlag told Daily Coffee News shortly after the launch. The company, founded in 2007 by Amy and Jason Silberschlag, is also in the process of moving from its current 3,000-square-foot roastery into a 12,000-square-foot production roastery that will also include a cold brew canning line and a commercial bakery.

Cartel Roastery Manager and Green Buyer Laurel Lynn will continue to oversee  the company’s existing San Franciscan SF25 roaster, which will be joined by a 70-kilo Loring Peregrine in the new space to help supply beans to Cartel’s 10 retail locations, wholesale clients and the growing cold brew operation.

“They’re such an important member of our team, and help keep the wheels of Cartel turning,” Silberschlag said of Lynn. “Since we’re bringing over our entire production operation, we have a fair amount of hoops to jump through. As of right now, it looks like most of the new equipment will be up and running by Summer 2022.

Baking operations will be overseen by Cartel Bakery Manager Felina White, with new menus of scratch-made items slated to appear every quarter. In the meantime, Cartel is preparing to release a new loyalty and ordering app and new RTD cold brew products featuring the rebranded look. The company also plans to open four new retail locations throughout the Southwest over the next five years.

Tell our editors about your new coffee shop or roastery here.