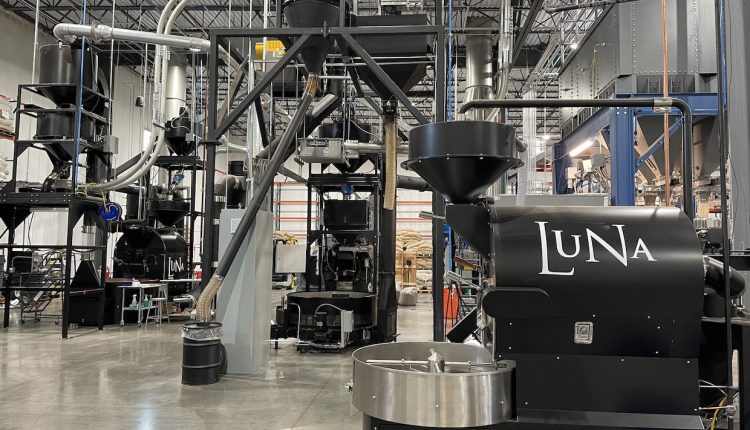 After Catastrophic Fire, Luna Gourmet Coffee is Back and Bigger in Denver

On March 31, 2020, near the height of pandemic-related anxiety for nearly all the world, a fire broke out at the 1927 schoolhouse building that was home to the Luna Gourmet Coffee & Tea Company, Boyer’s Coffee and their sibling brands in Denver.

While no one was hurt during the blaze, it was nonetheless a catastrophe upon chaos, gutting the building and leaving only a hill of ash.

“Everything was gone,” Luna Gourmet Co-Owner Douglass Barrow recently told DCN. “Not even a paperclip left.”

Without a specific plan in place, Barrow and his brother and fellow co-owner Jason Barrow pledged to roast again, saying at the time, “While our building burned yesterday, our company did not.”

“Doug and I were like, ‘We’ve got to rebuild,” Jason Barrow told DCN. “I think it was just blind faith, honestly. We were kind of in shock.” Now, less than two years later, the coffee company is resoundingly risen with the opening of a state-of-the-art 40,000-square foot roasting plant and headquarters in Denver’s North Washington District, just 18 blocks south of the former location.

The roastery is outfitted with three brand-new and custom-fitted roasters from Idaho-based Diedrich Roasters, who provided a 25-kilo machine, a 140-kilo machine and a 240-kilo machine. Those roasting systems are complemented by equipment from Modern Process Equipment for tubular drag conveyance and grinding, new packaging lines from Italy’s Miele Packaging, and numerous other custom handling and fulfillment systems.

Overall, the new facility more than triples Luna Gourmet’s overall roasting capacity to approximately 10 million pounds per year (given two shifts), while ushering in a new phase of growth for the company, whose approximately 60 employees from the old facility were all welcomed into the new plant.

The company declined to disclose the cost of the new facility.

Despite the capacity increase, the Barrow brothers are pushing the concept of “craft coffee at scale.”

The Barrows said that all of the coffees entering the roastery are first dialed in through sample roasters and the 24-kilo Diedrich, before those profiles are replicated for the larger industrial batches.

“We started on a 24-kilo Diedrich when Doug and I started 15 years ago,” Jason Barrow said. “We got our start with executive chefs… How do you go from roasting 30,000 pounds a year to 2.5 million pounds a year?” Douglass Barrow said that “craft coffee” ethos extends to the company’s sourcing and procurement efforts, including focusing on fresh-crop traceable coffees, leading and supporting community-building products in communities where coffee is grown and maintaining quality standards throughout the seed-to-cup chain.

The brothers credited Diedrich, which recently opened a shiny new factory of its own, with helping to execute the vision towards craft scalability.

“The goal was to become more efficient and concentrate on future growth in the specialty segment of the market,” Diedrich representative Launtia Taylor told DCN of the Luna Gourmet project. “Maintaining their reputation in that niche was of great importance to the team — so even though the expansion allows them to be more productive, and increased their roasting capacity by a great deal, Diedrich designed the facility to accommodate and fulfill their vision and mission to grow and evolve in that segment of the market.” Beyond manufacturing partners, the Barrows credited the industry at large with helping to keep the company afloat following the fire.

“We never would wish a catastrophic event on anyone,” said Douglass Barrow. “Through this entire process, [we] have been amazed at the amount of community support and outcry. Thirty or 40 people from the coffee industry called to say, ‘What can we do?’”

On the opening of the new roastery, Jason Barrow said, “This has been an all-in effort from the industry.”