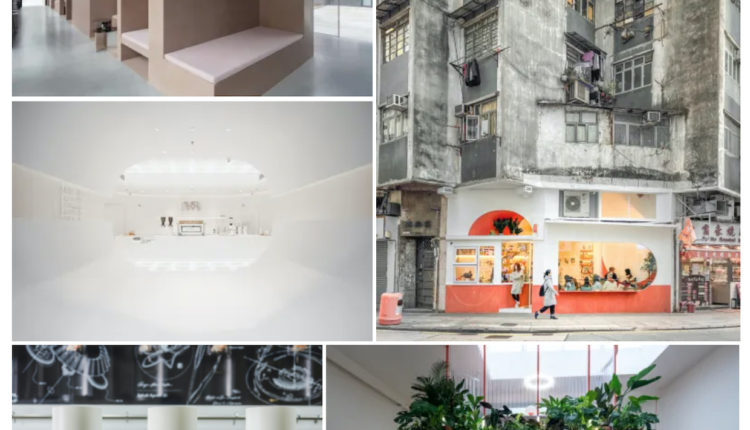 Design Details: The iDrip Booth Blinds with Science in Taiwan

Taiwanese design firm 3+2 Design Studio has offered a bright contemporary take on the popular theme that great coffee is the result of both science and art.

The Duet coffee bar. Courtesy photo by Absence from Island.

Design Details: Steel and Stone for Cuts and Cups at Duet in Hong Kong

Combining for a precision-focused pairing in Hong Kong’s Whampoa district is Duet, which is one part single-origin specialty espresso shop and one part hair salon. The view from just inside the main door to % Arabica Chengdu, where a white tunnel-like passageway connects a courtyard to the coffee shop.

Design Details: The Seamless Tunnel Vision of % Arabica in Chengdu

A minimalist reflection of the globalization of modern specialty coffee comes through in % Arabica‘s latest opening in Chengdu, China. The Japanese high-end coffee chain, which recently opened its first United States location in Brooklyn and now has locations in approximately 17 countries, turned to the French firm ARCHIEE for its third Chengdu cafe. Taps for hot or cold batch brew at the new Single O cafe in Tokyo. Image courtesy of Single O.

The “serve yourself from the airpot by the condiment station” model in coffee retail settings has received a modern, sleek interpretation from an Australian coffee company operating in Japan. Design Details: The White Expanses of the PAGA Microroastery in Bangkok

Opened earlier this summer in a corner building in the central business district of Bangkok, Thailand, PAGA Microroastery stands in white mountainous contrast to the busy streetscape. Design Details: The Translucent Coffee Hub of Grounds in Prague

In the formerly industrial and now trendy neighborhood of Karlin in Prague in The Czech Republic, repurposed construction materials, including a clear corrugated plastic wall, have been used to create transparency between roasters, baristas and guests. Embracing old and new, indoors and out, 1402 Coffee beckons from the main road on the western entrance to the domestic tourist-heavy Aranya district along the Bohai Sea coast. Design Details: The Hemispherical Daydream of Today is Long in Hong Kong

A group of young Hong Kong coffee professionals who studied and worked in Australia have brought a touch of Australian daylight to Hong Kong’s Sai Ying Pun district with the opening of Today is Long.