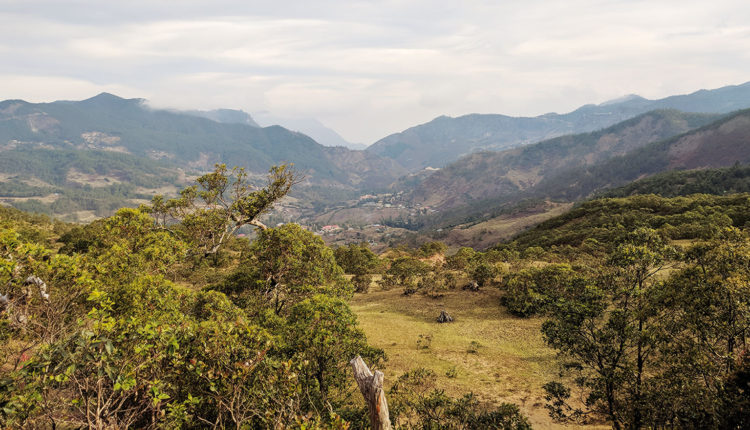 Timor-Leste has a coffee producing landscape unlike any other, with a rapidly emerging specialty coffee industry and commitment to quality.

Visiting origin is the dream of many coffee professionals. While COVID-19 has put a temporary halt to travel, they need not make the arduous journey to South and Central America or Africa once borders open up.

Just an hour off the coast of Australia lies Timor-Leste. A young nation offering incredible natural beauty, rich history, and unique culture. It’s “Explore the Undiscovered” tourism campaign beckons travellers to its rugged mountainous interior where coffee is grown by almost a third of the country’s households. Although the coffee industry is relatively young compared to others, it is one of Timor’s largest non-oil exports and plays a significant role in its economy.

“The growing conditions are extraordinary – tall, misty hills with cool nights and bright, warm sun during the day and fertile soil. The trees are old and essentially growing wild in the countryside, which makes them unproductive, but the potential for quality is extraordinary,” says Andrew Hetzel, Founder of value chain consultancy Coffee Strategies.

Historically, Timor-Leste’s claim to fame in coffee was its unique coffee species, the Híbrido de Timor or Tim Tim, a cross between Arabica and Robusta, featuring the former’s flavour profile and the latter’s resistance to coffee leaf rust. This plant played a crucial role in fighting rust outbreaks in the 1940s and was cultivated around the world.

The country was also occupied for practically as long as it has grown coffee, first by the Portuguese then the Indonesian military until 1999. Andrew says Timor-Leste’s millennials are its first generation raised in a self-governed state, and with that, carry a sense of national pride and opportunity.

“I’m very excited by what’s happened in just the past few years – young people learning about best practices in coffee as baristas and farmers. It’s been a difficult path, but I believe we’re seeing entrepreneurs bloom now, and they’re very interested in coffee,” Andrew says.

One of Café Letefoho’s first employees was Mariano ‘Ameta’ da Costa, who grew up in the coffee growing region of Atsabe and is committed to supporting the community’s coffee production.

A few months into the role, Ameta was sent to Indonesia for further training, which he shared with his co-workers when he returned. The next year, Café Letefoho sent him to Japan to take part in a program where producers shared how they produce coffee in their countries.

“At the time, not many people in Timor-Leste knew about the different processes they did in African countries. I saw the presentations of people from Ethiopia, Rwanda, and Burundi, where they talked about raised beds, quality, and the honey and natural process,” Ameta says.

“That opened my mind to how there’s not just one way to make coffee, and we can do things differently to improve the coffee quality.”

Ameta raised the funds to start his own processing business as a seasonal fruit picker in Australia. He says the difference in quality was immediately obvious to him, his family, and the community that bought the coffee.

“I wanted to develop the coffee quality across Atsabe, but only selling in the local market wouldn’t be enough. Maybe I could process my family’s coffee and just sell it locally, but not my neighbours and the community,” Ameta says.

Ameta partnered with Matt Graylee of Raw Material, who was of a similar mind as to how they could improve Timor-Leste’s coffee production. Ameta began leading Raw Material’s work in Timor-Leste, including the production of a wet mill in Atsabe. Matt says the country is primed to cater to the specialty market.

“If tomorrow is going to look better than yesterday, reaching the specialty market is a must… Every three months, global demand for specialty coffee increases by more than the total annual output of Timor-Leste. It is an incredible and obvious opportunity,” he says.

“I see production per hectare doubling as coffee forest regeneration programs come to fruition. Roasters have started bringing Timor-Leste coffee into their line-up full-time. In New Zealand, Flight Coffee has committed to replacing Brazil in its main blends with our washed Atsabe coffees going forward. This new demand will result in Timor-Leste coffee being present in over two million cups across New Zealand every year, providing an entire neighbourhood with reliable income every season.”

While there were those like Ebi and Ameta working individually to develop Timor-Leste’s coffee industry, many realised collaborative action was required to take it to new heights. In 2016, the country’s coffee community banded together with support from international development partners to form Assosiasaun Café Timor, or the Timor-Leste Coffee Association.

“Our main objective is to bring together all stakeholders in the coffee industry, so we can work together to improve the quality and meet demands from the international market,” says Afonso Oliveira, Vice-President of Assosiasaun Café Timor.

“Before, farmers worked their own way, and it was the same with buyers and baristas. Now, they can help each other to improve. The quality of a coffee is not dependent on one person, it’s on all those involved in the chain.”

“The festival and its competitions changed the mindset of the industry. Coffee shops began involving their baristas in more training, so they can make better quality coffee and cup it to tell good from bad,” Julia says. “That’s improved how they work from day to day.

“In the next few years, I think many coffee shops will open not only in the city but the districts and municipalities.”

The Coffee Quality Competition has served as a benchmark for the nation’s farmers to measure their coffees. A naturally processed coffee from Ameta won the 2018 event, with other coffees from the wet mill placing third and fifth.

The next year, coffee exporter Timor Global – Afonso’s employer – submitted a natural process coffee from Fatubessi, Ermera in the competition. It won with 88 points, making it Timor-Leste’s highest scoring coffee to date.

“Winning the competition, we saw a lot more interest from buyers around the world for that coffee, to the point there wasn’t enough of it to meet demand,” Afonso says. “Now some of these buyers, including those in Australia, are purchasing some of our member’s coffees, so we hope to strengthen our relationships in the Australian market.”

Numero Uno Coffee Roasters in Sydney was one of the recipients of the winning lot. Its Founder Gina Di Brita, and 2019 Australian Coffee Woman of the Year, says since first visiting Timor-Leste in 2017, she has watched the “incredible passion and perseverance of many people” advance its specialty coffee scene.

“Coffee [from Timor-Leste] is showing a lot of promise as a specialty grade in such a short time. It is quickly gaining momentum in being a reliable producer of increasing quality and productivity and displays so much versatility in the cup,” Gina says.

“Timor-Leste coffees are sweet, embodying layers of complex nuances of tropical fruit, delicate lime acidity, buttery mouthfeel, and lots of chocolate undertones. When roasted medium, it can be brewed as an espresso, long black, or using any style of filter, including pour-over, AeroPress, or drip filter, and pairs well with any milk, including plant-based milks.”

Among Timor-Leste’s most prominent buyers are Indonesia, Canada, the United States, Germany, and Australia. Jack Allisey, Green Bean Buyer for Veneziano Coffee Roasters, says Timor-Leste is a new origin to him and Veneziano, but one he’s excited to explore further.

“We’ve been able to integrate coffees from Timor-Leste this year into our micro lot program for the first time [in 2020], standing next to coffees from around the world,” Jack says.

“For Australian roasters, it ticks many boxes. Being so close and with such a historical connection, the coffee can almost sell itself. The fact that the quality can stand up on its own is just sugar on the top. We’ve seen such varied flavour profiles available that it’s hard to imagine that somebody wouldn’t be able to find something they enjoy.”

Five Senses Coffee is another roaster to start bringing coffees from Timor-Leste into Australia. Its Director of Coffee, Matt Slater, says the proximity of Timor-Leste significantly reduces the carbon footprint of shipping coffee, making it an ideal origin for Australia.

“We were lucky enough to grab a small lot of naturally processed coffee from the suco of Raimutin this year. Any coffee that tastes of booze-filled fruit cake, covered by layers of honeydew melon and raspberry with rich chocolate opens up a whole new world of sensory engagement,” says Matt.

“[That] quality has the potential to exponentially increase returns for smallholder coffee producers and improve lives across the community. In pandemic times, the increased focus on the importance of people, connection, and collaboration in the world makes this even more pertinent.”

With the nation’s young farmers eager to be involved, Ameta and many others look forward to seeing Timor-Leste play a larger role in the specialty coffee industry. He hopes Australia will continue to play a part in this.

“Timor-Leste is a small and young country. We cannot compete in coffee with other countries based on quantity, so we are going to compete with quality,” Ameta says.

“Australia is very close to Timor-Leste. It’s almost like an older and younger brother. It also has a big market for coffee so it’s a relationship I hope stays strong.”

This article appears in the October 2020 edition of BeanScene. Subscribe HERE.