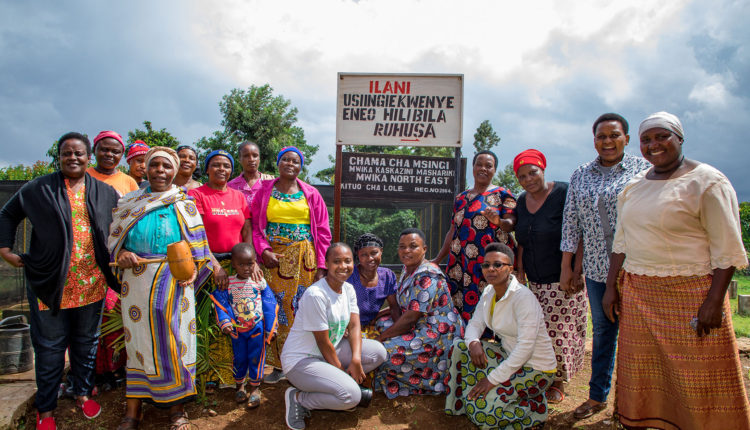 When Tony Strickett and Celina Lazarus established First Crop Coffee in 2014, they did so with the intention of giving back to the hardest working, and sometimes least appreciated people in the coffee supply chain.

“Something we really wanted to build into First Crop is the idea of helping farmers and farming communities,” Tony says.

“People in coffee use the word sustainability a lot, and for us, sustainability is saying to a community ‘we’re going to buy your coffee this year, next year, and the year after that’. It gives them the confidence their product will be sold, and as a result, they can budget against that, make investments, and the quality naturally improves.”

Tony says this model has been really successful for many of the farming communities First Crop works with, particularly in Central America. Selva Negra in Nicaragua send their produce to First Crop without agreed volumes in advance.

“When they have coffee ready, they send it to us and it’s our job is to find the buyers,” he says.

This means First Crop also needs to maintain ongoing dialogues and conversations with its producing partners so they are aware of what’s happening on the ground, challenges they’re facing, and how it can help.

GUATEMALA RELIEF FUND 2020
In November, Tony was talking with Vilma, one of the producers he workswith in Guatemala, on WhatsApp and asked her if she was OK after the hurricanes.

“She said, ‘I’m fine, my family is fine, everything in my life is fine, but there are families in this region [Quiché] who are completely cut off, with no food or water’. I asked if there was anything we could do and she said: ‘I know everyone is doing it tough because of COVID, but anything you can do is going to help’,” Tony says.

Tony and Celina reached out to First Crop’s network of roasters, and within a few days, raised $2200. First Crop matched the donation and sent the money to Vilma to buy food, water, barrels, and sacks for the 130 impacted families. She will also be able to provide the families with coffee seeds, fertiliser, and resources to help rebuild their coffee farms.

“We managed it all in seven days, which is phenomenal. We’re not a registered charity, so our customers weren’t getting a tax break. There were people in need, and they gave purely out of the goodness of their hearts,” Tony says. “The only thing I could offer everyone who contributed is an after-action report to see the difference they made.”

Tony says First Crop has created a strong customer base of businesses that appreciate its people-driven approach and believe in what they do.

“We’ve built that by taking people with us to origin and through the projects we work on and involve them in,” he says.

“Last year, Tanzania changed its laws so smallholders can’t sell their coffee directly to dry mills anymore and have to work with co-ops. For the 900 families in the region, Mwika was the closest place they could go, but they didn’t have the equipment set up to process that much coffee,” Tony says.

The government had provided certain co-operatives, including Mwika, with the necessary equipment, but Tony says the installation of a wet milling station was another US$20,000 (about $27,000) they didn’t have.

“While we were visiting the co-op, they showed us a breakdown of costs and were planning it for the future. That night at the hotel, Celina and I asked everyone if they’d be interested in helping us raise money to get the washing station installed,” Tony says.

Mwika told First Crop they could afford half of the installation, so it set out to raise the other 50 per cent. With 3000 kilograms coming in from the co-operative, they started with a US$1 per kilogram premium on the coffee.

Next, Wide Open Road designed t-shirts, First Crop had them made, and they sold them alongside Inglewood and DC Coffee – another long-term roaster of Mwika’s coffee, with all money from the sales going towards the project. Inglewood also hosted a fundraiser and auction at its roastery. All up, Tony says First Crop and its customers raised about US$13,000 (about $17,000). Mwika was able to gather the rest of the funds and the washing station officially opened in April 2020.

“Mwika is now able to help 900 families in that region to get their coffee processed, and the co-op itself can sell a lot more coffee,” Tony says. “At their current volumes, we’re buying pretty much all of their coffee, but ideally they can produce so much coffee now that they’ll be able to sell it to others too.”

RWANDA HOSPITAL AND SCHOOL FUNDING, 2017 – PRESENT
First Crop has also worked on several projects in Rwanda with the Land of a Thousand Hills Coffee Company (LOTH) since 2017. During the early-2000 coffee price crisis, many washing stations in the country were abandoned. LOTH bought several of these and started exporting Rwandan coffee to the United States in 2008.

“In Rwanda, the government sets the price for coffee cherries and it’s actually illegal to pay premiums, so no matter who is importing Rwandan coffee or how much they or a roaster pays, the same price goes to the farmers,” Tony says.

“LOTH knew what the international market will pay for Rwandan coffee and decided the best way to bridge the gap legally was to create community services that help the farmers.”

It started by employing farmers to work at, maintain, and manage its washing stations, so they received more of the value from their coffee.

When First Crop began working with LOTH, they had just finished building a school in the Ruli Mountains, about 40 minutes from the local washing station. While the Rwandan government would start staffing the school once it opened, income from the coffee is still needed to provide children with books, clothes, food, and other resources.

In the Kivu Lake region of Rwanda, money from the coffee First Crop sources was used to build a hospital for the local community.

“There are also a large number of women in the area, so LOTH started the Nziza Womens Coffee Project, entirely staffing the washing station with women, who own a lot of trees in the area,” Tony says. “Kivu is about an eight-hour drive from Kigali [the capital] and to get to the nearest hospital was a two-day walk. We were able to buy a lot of their coffee with funds going into the hospital. We could go and see it when it was under construction and it opened at the end of 2019.”

While these kinds of projects are beneficial, Tony says the true difference First Crop makes is the longstanding commitment it makes when buying coffee.

“When we are talking pricing and payment with producers, we ask them what they need to be a profitable business. We have a minimum price and won’t pay less than US$2 per pound, but we’ll ask what they need and work with them from there,” Tony says.

“We try to be 100 per cent transparent with the producers and roasters we work with. The roasters know when they’re buying coffee from us, they’re buying coffee that means the farmers are profitable, looked after, and that the business will continue to grow. And they’ll reap those benefits, knowing they’ve invested into a structure that is supporting everyone along the way.”

This article appears in the February 2021 edition of BeanScene. Subscribe HERE.