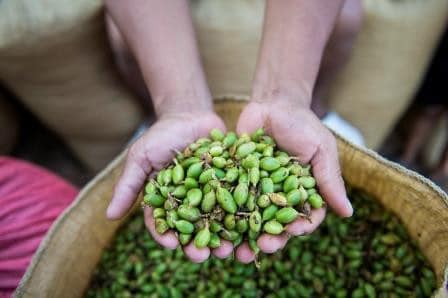 Anticonquista Café not only roasts their coffee in Chicago, but also sources it from Guatemala’s highlands.

Elmer Farjado and his wife Lauren Reese, the owners of Anticonquista Café, will open a location at Hermosa and Logan Square in mid-March. La Montanita will be the shop’s moniker.

“My family is overjoyed that we will have our own space,” Fajardo explained. “They are aware that I sell coffee at farmers markets, and they see how well the business is doing now that we have this location.”

Not only will they be selling packaged coffee beans and beverages, but they will also be inviting other community vendors to participate.

“This brings us one step closer to establishing a permanent location,” Reese explained.

Indeed, it is one of the numerous initiatives they have implemented throughout their coffee business.

Anticonquista Café’s journey began in December 2019 when they received their licence. Covid-19 delayed their initial shipment, but they obtained their exporter’s licence in September 2020, and the coffee arrived in October.

They initially sold the coffee at Logan Square Farmers Market. Additionally, they began selling coffee via bicycle in 2021, touring the streets of Chicago and stopping at local farmers’ markets and street festivals.

Farjado learned about the coffee process when he was only seven years old. He already knew how to cut, dry, and wash coffee at the age of ten.

Coffee has always played a significant role in the Farjado family’s life.

“Since I was a child, my family has planted coffee farms,” Farjado explained. “I was raised on farms. My grandparents also owned coffee farms.”

Farjado immigrated to the United States at the age of 17 and supported his family financially during a difficult time on the farm.

“When I saw the price of coffee in coffee shops in the United States, I thought about my time working in Guatemala with my family and how there were times when my father lost money on his farm,” Farjado explained.

Fajardo and Reese say they were ecstatic when they began selling the farm’s products in the United States and saw how much support they received.

“I enjoy working alongside my family,” Farjado explained. “They are pleased with the work we completed. I’m happy because my family has been extremely supportive of our vision for Anticonquista Café.”

According to Reese, Farjado’s mother roasts the coffee beans on a comal, a flat, smooth griddle. When someone purchases roasted coffee in the United States, the entire coffee bean is roasted evenly. Roasting coffee beans allows for greater control.

“While much marketing touts artisan roasted coffee, when we begin roasting it here with the machine, it is very much like a science-based roast,” Reese explained. “Artisan roasting occurs when Elmer’s mother performs the task. It’s more logical.”

“We brought unsorted coffee for our clients to choose from and inspect for defects,” Farjado explained. “We want them to see a portion of what goes on on a farm.”

Reese believes it is critical to educate consumers not only about the origins of coffee, but also about its history.

“There are many people who work in the coffee industry who are not doing so voluntarily,” Reese explained. “It is something that is taken for granted in the United States, among other things.”

“A large portion of the coffee comes from farmers,” Farjado explained. “This is a point I want people to consider. We want the farmers in Guatemala to earn a higher price for their produce.”

Although the Anticonquista Café space is insufficient for community programming, they hope to expand in the future to offer immigrant resource events that Chicago-area organisations can help facilitate.