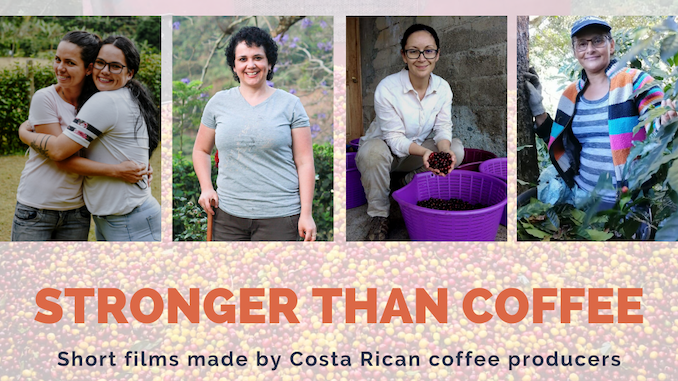 Stronger Than Coffee to Showcase the Stories of Leading Female Producers

The collaborative project between Bean Voyage and Needle + Frame shares the stories of five Costa Rican producers from their own cameras.

At this point in coffee history, we’ve had plenty of chances to ”go to origin” through captivating cinematography, but how often are these videos being shot by the actual coffee producers? NGO Bean Voyage and arts collective Needle + Frame aim to change the perspective on coffee-growing from the observers to the farmers themselves through Stronger Than Coffee.

Premiering in early 2022, the docu-series follows the lives of five female coffee producers in Costa Rica from their lenses. These women have been handed five cameras to film their own farms over the past year, and are ready to share their own versions of what the true story is behind their work. ”[My film] tells the story of my dad, the dream he had of opening his own mill to process our coffee,” says Tatiana Vargasof Legados Café Artesanal, one of the five voices of Stronger Than Coffee.”He did not achieve that dream before he died, but now I am in charge of fulfilling his dream.”

Along with Tatiana, other producers featured in the films include Ericka Mora from Café EyF, Arleen and Maria Jimenez of Café de Altura, La Angostura, and Margoth Rivera at Aromas de la Legua. Told in Spanish and English, the film features women who are participants in Bean Voyage’s program that supports female coffee producers’ success in Costa Rica.

In each short film, these women document the successes and hardships of traditional coffee farming in the face of threats like climate change, unpredictable markets, and gender barriers. And though all share similar struggles, each woman has a unique story to tell, and showcases just how difficult but rewarding it can be to run a coffee farm. ”Behind every cup of coffee there are thousands of feelings,” emphasizes Tatiana.”There is a lot of effort, and despite all the difficulties, all the producers always have a lot of love, a lot of passion for coffee. That [love] is what allows us to continue producing and to be able to share this with other people.”

There are still opportunities to support the docu-series. Donations to Stronger Than Coffee can provide costs for items like camera equipment and internet connections to allow participants to attend virtual trainings. For a limited time, you can also receive a coffee bag from one of the filmmakers for your donation.