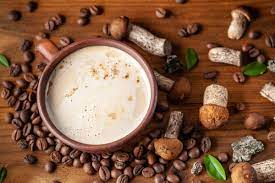 While coffee may dominate our mornings, it is not the only — or even the best — way to start the day. Some people, fed up with the jitters, over-dependence, upset stomachs, and a built-up tolerance to caffeine, are now substituting mushroom coffee for their morning cup of Joe. And they may be onto something: the best mushroom coffees may provide beneficial effects such as calm, all-day energy, and a stronger immune system.

How Is Mushroom Coffee Prepared? Ingredients for Mushroom Coffee
The best mushroom coffees are meticulous blends of various mushroom extracts, with a splash of tea leaves or coffee beans thrown in for good measure. These are not edible mushrooms (or the trippy psilocybin variety), but rather medicinal mushrooms that have been used for thousands of years as natural health treatments in some cases. The best mushroom coffees also taste like coffee, not mushrooms, so there is no reason to be concerned about flavour.

The following is a list of some of the most frequently used mushroom coffee ingredients. The majority of claimed health benefits are based on a large body of anecdotal evidence, as well as cell and animal testing.

Lion’s Mane: Lion’s mane, so named due to its shaggy appearance, has been used medicinally since ancient times. Numerous studies indicate that the fungus may help to strengthen our immune systems, decrease inflammation, and even alleviate anxiety and depression. Additionally, animal research has demonstrated that lion’s mane extract has the ability to kill cancer cells, aid in the treatment of diabetes, and reduce the risk of heart disease.

Chaga: Another fungus that has been used by humans for centuries, chaga mushroom, may provide similar health benefits to lion’s mane, including anti-inflammation and immune system stimulation.

Reishi: Primarily found in Asia, the use of Reishi mushrooms in Eastern medicine dates back hundreds of years. Preliminary research indicates that Reishi may boost energy levels while alleviating depression and anxiety symptoms. Additionally, it is used to regulate blood sugar and boost overall immune health.

Cordyceps: Despite its unappealing appearance as a parasitic fungus, cordyceps has some extremely promising potential health benefits, all of which are supported by laboratory and animal research. It has been shown to improve exercise performance, sexual desire, mental energy, and cardiovascular health, all while delaying the onset of signs of ageing.

Additionally, if you’re wondering whether mushroom coffee is legal, the answer is yes: mushroom coffee does not contain psilocybin mushrooms (the psychedelic variety), which means it’s legal to order online from anywhere in the country.