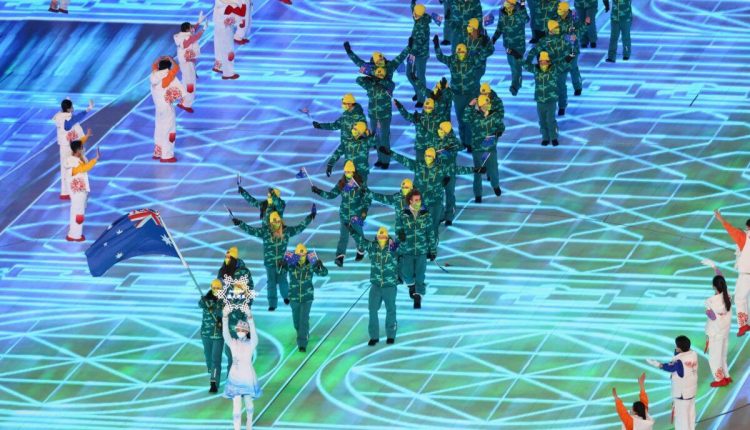 Between 24 January and 23 February, Jacob made coffees for Australian athletes, coaches and support staff in a permanent café established in the Australian headquarters in the Beijing athlete village.

“When I became a barista, I didn’t really think that one day I’d be walking with the Australian team in an Olympic opening ceremony,” Jacob says.

“Once I arrived, we just set up the café and it was go time. The winter team is 46 athletes, plus the Australian Olympic people and support staff, and by lunchtime I would see everyone at least once. Some people would come by three or four times a day,” Jacob says.

“It was just me, so sometimes I’d be working 16-hour days. It was worth it though because the atmosphere was just electric.

“Athletes would go out to compete, then come straight back to the café wearing a medal around their neck and the entire place would just go nuts, everyone jumping up and down and cheering.”

“Luckily, I was in the closed loop so I could cheer Australia on at a few events. Everyone really became one big team – I even got the proper Olympic kit,” Jacob says.

The coffees were provided free to the Australian team, so members of other teams were not allowed into the café.

Unfortunately, says Jacob, the lure of authentic Australian coffee meant he had to be on guard against international interlopers.

“There were a lot of people from other teams trying to sneak into the café. Uniform jackets were swapped, under-the-table deals were offered, people snuck under tent sides – Australian coffee has that international reputation,” he says.

As for the coffees themselves, Jacob says the Olympians have “fairly standard” tastes.

“We weren’t sure what the athletes would want, so I stocked up on a lot of milk alternatives and extra options before I left Australia. Mostly though, everyone wanted classic coffees – I made a lot of long blacks and flat whites,” says Jacob.

The 100 kilograms of coffee beans provided by Locale, a mix of its Original Gangsta and MVP blend, was just enough to last the entire period. The espresso machines couldn’t be plumbed due to water quality issues, so Jacob filled the machines by hand with bottled water.

“I’d say I made around 150 coffees a day, every day for four weeks. So that’s about… you can do the maths on that,” he says.

One of the two Linea Minis Jacob used was gratefully autographed by the entire Australian Olympic Team. Locale plans to auction the machine and donate a portion of the funds to those affected by recent floods. Follow @localeespresso for updates.