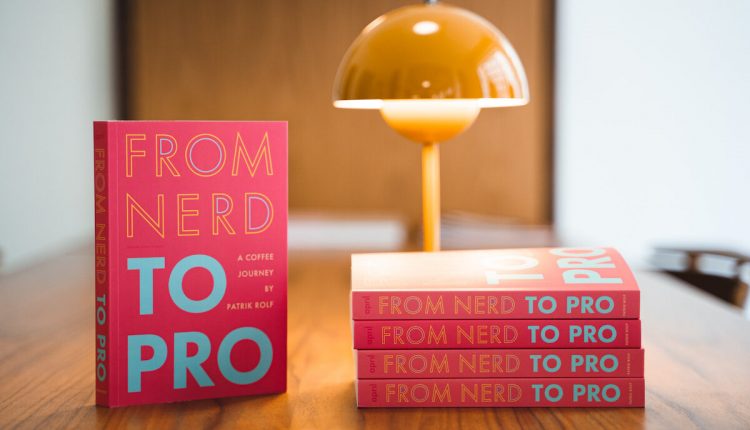 From Nerd to Professional: Shared Lessons from a Coffee Competitor

Patrik Rolf has launched a Kickstarter campaign to support his new book From Nerd to Professional, which details his journey in the coffee world.

When Patrik Rolf started immersing himself in the world of specialty coffee about a decade ago, he found himself overwhelmed with curiosity—but unsure where to look for guidance.

“I had so many questions and no one to answer them,” he says now. “What is the best coffee in the world? How do you become a coffee roaster? How can I turn this into a sustainable career? How do I handle this hobby and turn it into something I can pay my rent with?”

The coffee professional—who would eventually found Copenhagen, Denmark’s April Coffee Roasters and place second at the 2019 World Brewers Cup—was able to find his way to success through perseverance and hard work. And while no one would discount the importance of those qualities for future aspiring coffee pros, Patrik has embarked on a project to share some of his learnings to benefit others.

The result is From Nerd to Professional, a new book penned by Patrik sharing his journey in coffee. “It’s the guide I wish would have been available to me when I first stumbled into the coffee world,” Patrik says. “It’s an unfiltered version of my own experience, including never-told stories from when and why I first started to work with coffee.” Patrik recently launched a Kickstarter campaign for the book, and—if the campaign is successful—plans to ship the first copies in May. He will also donate 10 euros for each book ordered from the Kickstarter campaign to the Ukrainian Red Cross as conflict devastates the European nation.

To tell his story, Patrick divided From Nerd to Professional into two parts. The first section, titled “My Coffee Journey,” tracks his first decade in coffee. “I tell how and why I first started and learned to roast coffee,” he says, “and the story of moving to another country to improve my skills. I also discuss my process behind creating and running my own coffee business and the many competitions I have been involved in over the years.” The book’s second part is devoted to lessons he’s learned while working in coffee. “It’s a toolbox of examples and ideas that will help you define your own place in the coffee industry,” Patrik says.

Since the onset of the COVID-19 pandemic, Patrik and the team at April Coffee Roasters have immersed themselves in projects, such as opening the April Coffee Store and launching a coffee tamper kit, among other initiatives. For Patrik, writing a book was a steeper challenge. “Writing has been the most time-consuming and challenging task I have been doing since I started April—nothing else really compares,” he says. “But that’s what made it interesting. And luckily I have a talented team around me at April, and I was able to hand over some of my everyday tasks and free up time for the book.”

Once he finished From Nerd to Professional, Patrik had to envision how he wanted to present it. Already committed to sustainable practices at April, he carried this approach over to the production of the book, which is printed exclusively using material from recycled to-go cups. “I found this outstanding printing company here in Denmark named Narayana,” he says. “They got interested in the idea, and we researched different ways to integrate it.”

With the Kickstarter now launched and publication on the horizon, Patrik hopes the book serves as a helpful tool for the next wave of coffee professionals. “Personally, I have gotten my most important insights in life from other people’s experiences, which is a big reason I decided to share my own,” he says. “I aim to give the reader an honest representation of what it will take to discover your own goals. It’s about giving back to the industry and making sure that the next generation has a better insight and understanding of how things work than I had.”

For more on the book and the campaign, find the Kickstarter page here.