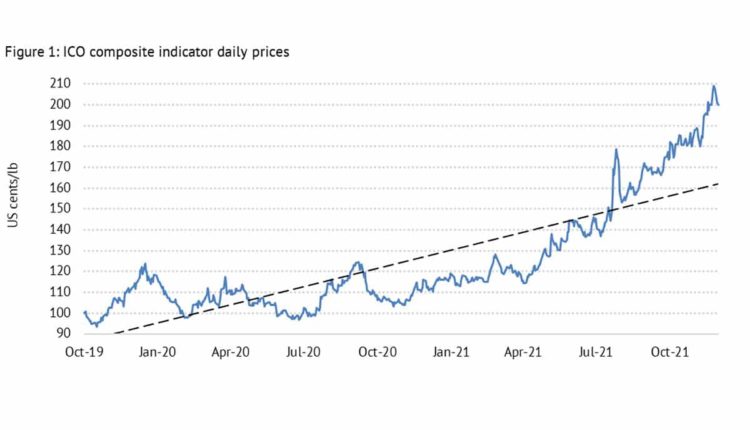 In November 2021, coffee prices reached new multi-year highs, as the monthly average of the International Coffee Organization (ICO) composite indicator price reached 195.17 US cents per pound, an increase of 7.5 per cent as compared to 181.57 US cents per pound in October 2021.

The ICO says price levels during coffee year 2021/22 mark a significant and steady recovery from the low levels experienced over the four preceding coffee years.

Since November 2020, where the ICO Composite Indicator was priced at 109.70 US cents per pound, an increase of 77.9 per cent has been recorded.

Moreover, the ICO says the average price of November 2021 is the highest it has been in a decade, since reaching 193.90 US cents per pound in October 2011.

The monthly average for September 2011 was 213.04 US cents per pound. The ICO says the steady upward trend observed since the start of coffee year 2020/21 shows how the recovery of coffee prices, after four consecutive years of low-price levels, reflects a dramatic change in overall market conditions.

As coffee prices continued to increase, intra-day volatility in November 2021 of the ICO composite indicator price increased by 1.2 percentage points to 9.5 per cent in November 2021.