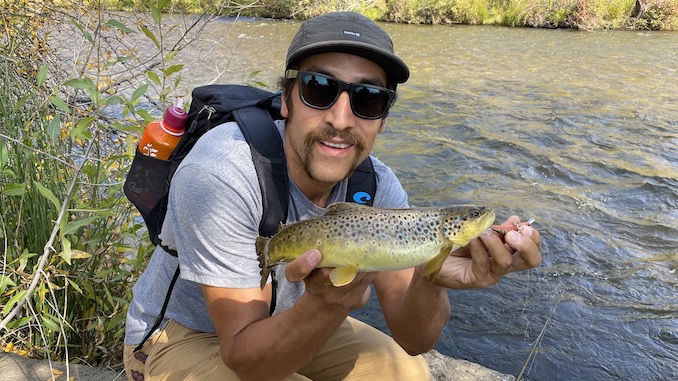 We chat with the longtime coffee professional about his work in the industry.

A lot of people in coffee enter the world of specialty due to some kind of enlightening moment they experience at a job, which shows them what coffee can truly be. For me, that moment was during a brief but meaningful stint as a barista at Cafecito Organico while working with Andrew Gomez (he/him).

As the manager at this micro-roastery at the time, Andrew taught me the inner workings of espresso extraction with excitement and without any feelings of superiority. That resonated with me as I moved throughout different cafés, and apparently it did for Cafecito too, because they kept a picture of Andrew on their retail shelves for years after he left.

Ever since then, it has been fulfilling to run into Andrew through different circles over time, still as passionate and excited about the industry as he was when we first crossed paths. He always seems to be some sort of a backstage manager at a given coffee event, a comparison meaning that he’s always ready to support everyone—yet nobody in the crowd knows that he’s the one who has been helping run the show the whole time.

Today, Andrew is newly appointed to Eversys as a business development manager for the West Coast of the United States. As two coffee-remote people do, we chatted in our sweats and T-shirts over Zoom about his coffee journey, what moving up in the specialty-coffee world truly looks like, and the endless fishing he does in his free time.

Katrina Yentch: Hey Andrew, thanks for making time to chat with me! It feels like so long since we last ran into each other. Can you share a little about your background in coffee? What made you decide you wanted to make coffee a career?

That’s such a good question! I feel like as most people do, it was from working at Starbucks. That was my first coffee job that I ever had, which was inside a grocery store that I was working with at the time. So then you kind of get “indoctrinated” into the Starbucks world and start learning about all these kinds of cool drinks. … It was cool to learn about drink creation, the most basic understanding of coffee, and then just go from there.

From there I just started working at different coffee shops like Peet’s. When I talk about my coffee background I actually give them a lot of credit because they were actually really invested in teaching their employees everything about the coffee. I then worked at a tiny kiosk in Long Beach (Calif.) called The Daily Grind, and this is when I met people who taught me to really look at coffee in an intriguing way. Jonathan Sepulveda, I really credit him a lot for teaching me most of what I know about coffee, like coffee being a fruit and all the basic stuff we know. Everybody has to learn it at some point in their career. I then worked at The Green House and then Cafecito Organico for a few years.

Which experiences of all of those made you realize that you want to make coffee a long-term career?

I think being with Cafecito Organico and seeing at that time, starting to make friends with people in other coffee businesses and seeing this growing network of positions within specialty coffee, at the time I was only aware of barista shift lead manager.

I think the thing that set it off for me was working for Cafecito, and getting to do an origin trip. That was one of the key turning points, seeing the actual process of seed to cup and realizing I get to be on the receiving end of all this work. It’s like your cup of coffee is never the same after that. I know it’s such a ubiquitous thing to say, but it really does change your perspective.

Since we worked together you’ve had some pretty awesome coffee jobs, from your time with Curtis to your role now with Eversys. What would you advise others in this field to do to progress forward?

Ultimately I just want to preface my experience and response by recognizing that there have definitely been certain privileges in my career that have helped me navigate the workplace, so it’s hard for me to say that moving up can be the same for everyone.

That being said, working hard, and smart, has always been at the foundation of my ethic and what I always stress to others. When others give up, keep searching for the answer or solution. It’s that quality that I always admired in people when I was a manager, and something I have strived to do in the workplace. Having an open mind is huge, and being able to take feedback, evaluate it, make the needed changes, and push on to keep you at the top of everyone’s radar.

Also embrace the unknown in rough situations and projects. I’ve often found that when the task at hand is the most difficult, the chance for learning and growth is also at its highest. Instead of seeing them as tasks you are not prepared for, which they may well be, look at them as a chance to learn new skills, because you never know what new opportunities can come from broadening your skill set.

What have been some of your favorite parts of working in this industry?

Obviously the people are great, and that’s such a special thing about the industry we work in. More often than not you’re working with people who are here because they have a passion for it. People end up in this world from so many other industries because they get so burnt out in them.

You also get to work in an industry that gets to drink stimulants every day. I mean, you get to drink an amazing product all the time, and something that is so special to the general population.

Coffee has a place in world history, which provides this beautiful thing to people globally. So that it’s for me: the people, the product, and the interactions you get to have over both of those.

Who is someone you admire in the industry and why?

I’ve thought about that and there’s a lot of people that come to mind that have influenced me, but I wanna say Veronica and Eric (Grimm) at Glitter Cat just because I love what they’re doing so much. They saw a need in our industry and some place that needed help and resources and just did something about it. I really look up to them for that and it is something I very much respect.

Too much time at Curtis, so black coffee at home. I’m currently rocking the Behmor and Baratza setup. When I’m out in a cafe I’ll always try some kind of fancy coffee, like a pourover if that’s still an option. I’m also really digging people’s holiday blends and drinks! I think we’re in a time where it’s really cool to see people do these wild tasty sweet drinks. I like Rose Park café’s miso caramel latte.

And your interests outside of coffee?